Types of Zombies and How to Identify them 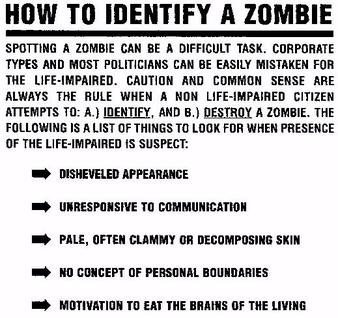 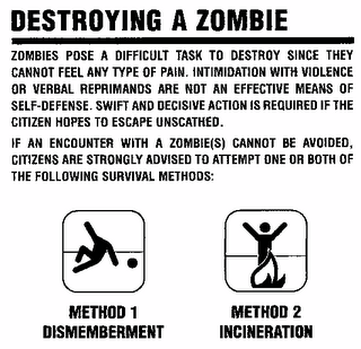 Zombies are attracted to noise, flesh of the living and any type of light (flashing or just really bright). So if you want to stay away from the zombies please try not to make noise or shine bright lights.  However, these same attractions can be used as a way to lure the zombies into a "killing field" to be destroyed.

Killing or destroying a zombie is similar in both the muggle and wizard world. There are two most common ways to destroy a zombie and that is by destroying the brain, removing the head from the body or setting them on fire.

The quickest way to destroy a zombie is by destroying the brain. There is no pretty way of doing this, but this is the quickest. A bullet to the brain, arrow through the head, blunt force trauma to the head are ways to destroy these creatures. Granted there are many ways to destroy the brain, so one can get creative in finding ways to do so. Remember Muggles, if you are using a gun or cross bow or anything that requires any type of ammunition, please make sure you are a great marksmen. You don't want to waste your bullets or arrows or whatever other ammuntion by missing the brain. Do not aim for the shoulder or heart or legs. These zombies will continue to attack until their brain is destroyed or their head is removed from their spinal column (beheading is a great way to kill a zombie. There really isn't a nice way of doing this, just use your imagination and do it). Using a grenade is effective in the sense that it can destroy a lot of zombies, but one must understand, while a few may have had their brains destroyed, others may have not, so take heed while crossing the land of the splattered zombie body parts, you may still get nibbled.

Fire is the most effective. The slowest, but most effective. Zombies are susceptible to fire because fire will destroy and cleanse everything. Fire while effective, is slow, so this method is best used in conjunction with the other method of destroying the brain. After all, who wants to have a flaming Runner zombie still running after you? Not me! For muggles weapons like flame thrower, blow torch, or even a aerosol can and lighter are great weapons. For wizards, since the killing curses won't work for obvious reasons and stunning spells won't really cause any harm, "Incendio" is your best spell or any spell that will cause anything to explode.

Drowning a zombie does NOT work. Since zombies do not need air to survive, putting them in water will not have any effect. So if you put them in a river/pool/lake etc.. this will not destroy them. It will only make the livings life much harder and more difficult because if we want to swim, drink water, bathe, etc...we need to know that they are not in the water and sneak up on us.

Remember these are not the only ways to kill a zombie, but these are the most common. Just remember, in order to destroy a zombie you must destroy the brain. So you can get as creative as you want.

****WARNING****
As you are destroying the zombie, do not get any of their blood/saliva into your mouth, open wounds, or eyes. Their blood and saliva are highly contagious. If you happen to get blood or saliva into your body, then it is only moments away until you become one of the walking dead. 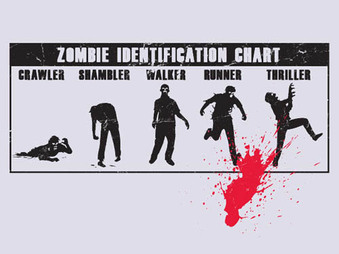 The Identification Chart of Zombies = ALL ARE DANGEROUS!

As you can see there are 5 types of zombies. The Crawler, Shambler, Walker, Runner (most scary), and the Thriller (the ones that love to dance before eating you). When looking at the chart you may think that the Crawler is the weakest out of the bunch. However, imagine yourself asleep. You don't have a care in the world in your lovely dream state. Then suddenly, OUCHIE!!!!!!!!! OMG you are bitten on the leg or hand by a crawler. Congrats you will be turned into a zombie now. The Crawlers are the silent, slow, but still dangerous zombie. Just because they have half a body doesn't mean you should pass them up on killing them. ALL ZOMBIES NEED TO BE DESTROYED!

A Shambler & Walker are similar in speed. The only difference is that the Shambler is keeled over while walking.  The Runner is by far the most dangerous. The runners are the ones that show the most savage of rage and hunger because they can chase you down at fast running speed. If you see these zombies, run, RUN LIKE THE WIND.

The final zombie may seem comical or even cute. However, they are the 2nd most dangerous zombies out there. They are the Thriller zombies. The name was taken from the Michael Jackson Thriller video due to the fact that these zombies like to dance around. These zombies were most likely dancers in their living life. The Thrillers are the type of zombies that will mystify you with their dancing moves and just as you are hypnotized by their amazing synchronization in dance steps, they ATTACK. So if you see the dancing Thrillers, look quick but don't stay too long.

No one really knows how or why there is a different evolution of these types of zombies, they just happen to be different types. Just like the living evolve, so does the dead.
As you can see the zombies are mesmerizing. The time that it took you to watch the 2:18 sequence you could have been bitten. REMEMBER DO NOT BECOME HYPNOTIZED! LOOK BUT RUN!!! KEEP RUNNING!